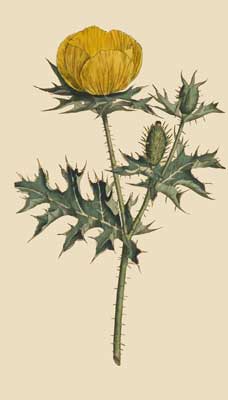 This species of Argemone is a native of Mexico, and the West-Indies, where we should suppose it to be a very common and noxious weed, from the name there given it of Fico del inferno, or the Devil's Fig: it has long been introduced to this country; Gerard, who cultivated it with success, ludicrously attributes its nickname to a different source: "The golden Thistle of Peru, called in the West-Indies, Fique del inferno, a friend of mine brought it unto me from an iland there, called Saint Johns Iland, among other seedes, what reason the inhabitants there have to call it so it is unto me unknown, unless it be bicause of his fruite, which doth much resemble a figge in shape and bignesse, but so full of sharpe and venemous prickles, that whosoever had one of them in his throte, doubtless less it would send him packing either to heaven or to hell."

Miller mentions it as a plant of no great use or beauty, in the latter point of view Clusius, who was one of the first to figure and describe it, and Gerard, thought differently; its foliage is certainly beautiful, somewhat like that of the milk thistle, its blossoms are large and shewy, though not of long duration; like the Celandine, the whole plant abounds with a yellow juice, which flows out when it is wounded; it differs from the poppy, to which it is nearly related, in having a calyx of three leaves.

Though a native of a very warm climate, it is cultivated with as much facility as any annual whatever; in the gardens about London, where it has once grown, and scattered its seeds, it comes up spontaneously every spring, flowers in July and August, and ripens its seeds in September; these are large, somewhat round, of a black colour, with a beautiful surface; a light rich soil and warm situation suits it best.