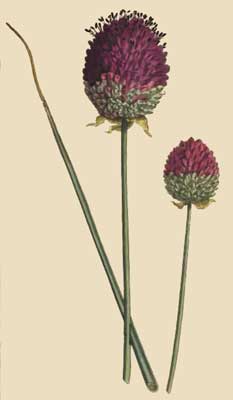 Baron Haller in his most admirable Monographia on the plants of this genus, published in his Opuscula Botanica, describes and figures this species, a hardy perennial, being a native of Switzerland, and cultivated according to Mr. Aiton, in the garden at Oxford in 1766.

It usually grows to the height of three feet, thriving in almost any soil or situation, its flowers as in many other species grow in a capitulum or little head, not an umbel, strictly speaking, as Linnæus describes it; this head is at first covered with a whitish membrane, wearing some resemblance to a night-cap, on the falling off of which the whole of the capitulum is perceived to be of a green colour, shortly the crown of it becomes of a fine reddish purple, this colour extends itself gradually downwards, presently we see the upper half of the head purple, the lower half green, in this state it has a most pleasing appearance; the purple still extending downwards, the whole head finally becomes uniformly so, and then its flowers begin to open, and emit an odour rather agreeable than otherwise; on dissecting a flower we find three of the stamina in each longer than the others, and bearing two little points, which proceed not from the antheræ, but from the top of the filaments, it is therefore one of those Alliums which Linnæus describes, as having Antheræ bicornes.

This species increases readily by offsets, which should be separated and planted in Autumn.

We know not why Linnæus should give it the name of descendens, unless from its being one of those plants whose roots in process of time descend deeply into the earth.