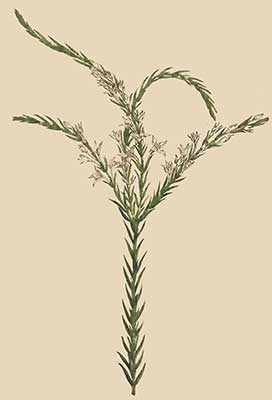 The plant here represented appears to have been first described and figured by Burman, in his Pl. Afric. under the name of Passerina: Linnæus introduced it in the 3d edition of his Sp. Pl. by the title of Passerina dodecandra; discovering afterwards that it had in reality only four stamina, and that the other eight substances, mistaken for such, were so many glandular nectaria, he made in his Mantiss. Plant. a new genus of it, by the name of Struthiola, and assigned it the trivial name of erecta; in the abbreviated generic description given of it by Prof. Murray, an alteration is made in this generic character, and what before was considered as Corolla, is here regarded as Calyx; no reason is assigned for this alteration, and we are at a loss to account for the propriety of it.

Mr. Miller, who cultivated this plant in 1758, describes it in his dictionary, and observes very justly, that though its branches when young are erect, when loaded with blossoms they incline to a horizontal position; hence the term erecta becomes an improper one, and should be changed for one more expressive.

This species of Struthiola is a very common shrub in our greenhouses, will grow to the height of five or six feet, and, though not so ornamental as some other plants, has the merit of flowering during most of the year, and often in the depth of winter.

Is readily increased by cuttings.