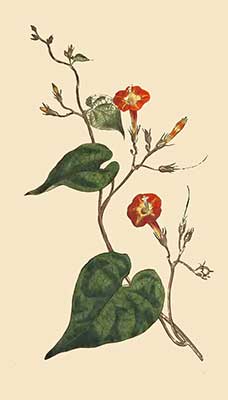 The Ipomœa is very nearly related to the Convolvulus, one principal difference consists in the different form of its stigma, which is globular, like that of the Primrose; whereas in the Convolvulus it is divided into two substances, as is obviously shewn in the Convolvulus arvensis and sepium, but all the plants of these two genera have not this character marked with equal strength.

The present species is a twining plant, will run up a stick to the height of six, eight, or ten feet, and produce an abundance of flowers, of a rich orange colour tending to scarlet, which renders it one of the most ornamental annuals cultivated in our gardens, into which it is not as yet generally introduced, though cultivated by Mr. Miller, in 1759.

Mr. Miller describes it as a native of Carolina, and the Bahama Islands, Mr. Aiton of the West-Indies; it flowers from June to September.

It is cultivated in the same manner, and with the same ease as other annuals; three seeds may be set in the ground, about four inches asunder, in the form of a triangle; when the seedlings are sufficiently advanced, a tall stick is to be thrust down in the centre betwixt the three plants, for them to twine around: the warmer and more sheltered the situation, and the richer the soil in which they are placed, the taller the plants will grow; by raising them on a hot bed, you may anticipate their natural time of flowering, and be more certain of obtaining good seed.