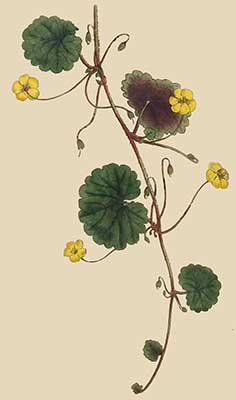 The foliage of this plant greatly resembles that of Ground Ivy, and its branches trail on the ground somewhat in the same manner, extending to the length of several feet; but it is not on the ground that it is best seen, as its flowers are apt to be hid among the leaves: it appears most advantageously when growing in a pot, placed on a pedestal, or in some elevated situation, where its branches may hang carelessly down: thus treated, when fully blown, it becomes a most pleasing object.

Linnæus, the son, in his Suppl. Plant. observes, that the Disandra varies extremely in the number of its stamina, as it does also in the divisions of its calyx, and corolla; in this respect;, indeed, we do not know its equal: fortunately for those systems of Botany, which are formed from the number of certain parts of the fructification, few such inconstants exist.

Professor Murray observes, that seven is the most prevalent number of its stamina, five the most natural.

Linnæus describes it as a native of the East; Mr. Aiton informs us, that it was introduced here about the year 1771, from Madeira.

It flowers during most of the summer months; in the winter it must be kept in the green-house; in the summer it will bear the open air, grows readily from cuttings, should be planted in rich earth, and plentifully watered in dry weather.