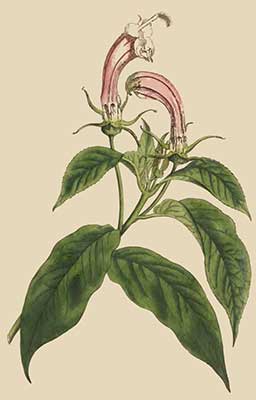 The Lobelia surinamensis, a plant newly introduced here, is minutely described in the Suppl. Pl. of the younger Linnæus, under the name of lævigata, apparently from the smoothness of its flowers: in the year 1786, Mr. Alexander Anderson sent this plant to the Royal Garden at Kew, from the West-Indies, where it grows spontaneously, as well as at Surinam; and Mr. Aiton has inserted it at the end of the Hort. Kew. assigning to it a new specific description, and a new trivial name: our drawing was made from a plant which flowered in the stove of Messrs. Grimwood and Co. Kensington, to whom it was imparted by Richard Molesworth, Esq. of Peckham, a gentleman liberal in his communications, and anxious to promote the cause of Botany.

This species of Lobelia is a stove plant, having a some-*what shrubby stalk, growing to the height of several feet; its blossoms are very large, of a pale red colour, and its Antheræ, which might be mistaken for the stigma, unusually hairy.

It begins to flower in January and February, and continues to blossom during most of the summer.

Is increased by cuttings.