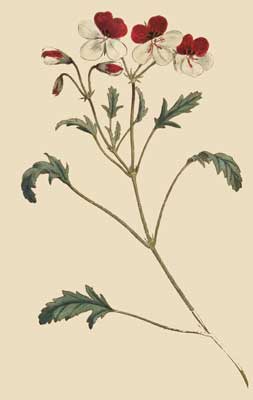 The Pelargonium tricolor, a species perfectly new, in point of beauty is thought to eclipse all that have hitherto been introduced to this country; its blossoms are certainly the most shewy, in a collection of plants they are the first to attract the eye, the two uppermost petals are of a beautiful red, having their bases nearly black, the three lowermost are white, hence its name of tricolor: this peculiarity of colour joined to their form, has induced some to fancy a similarity betwixt its flowers and those of the Heartsease: to the blossoms of the Lathyrus articulatus in point of colour, they bear also a distant resemblance.

In our eagerness to lay before the public this striking novelty, we may possibly omit some circumstances relative to its history and treatment, which future experience may develope, they will not, however, we trust be very material; the plants which we have had an opportunity of seeing have scarcely exceeded a foot in height, growing up with a shrubby stem, and expanding widely into numerous flowering branches, unusually disposed to produce flowers in a constant succession, so that during most of the summer the plant is loaded with a profusion of bloom; these flowers for the most part go off without being followed by any seed, and when any seed is produced, of which we have seen a few instances, there is generally one perfect and four abortive, frequently all of them fail; the blossoms vary in the number of their stamina, four are most usually apparent, three superior, and that very constantly, one inferior and often two, we have never observed seven, the proper number of fertile stamina in a Pelargonium: the whole plant is covered with short white hairs which give to the foliage a somewhat silvery hue.

Instances have occurred in which one or more of the white petals have had a stripe of red in them, and we have observed that the dark colour at the base of the uppermost petals is, in a certain degree, soluble in water, for on the plants being watered the white petals have here and there become stained by the colouring matter proceeding from it, and which, in a diluted state, is of a purplish tint: as the flowers decay, this apparently black part, distinguished by the roughness of its surface, arising from prominent lucid points, and which essentially distinguish the species, is sometimes perforated with numerous small holes.

Mr. Masson, who is employed to collect plants at the Cape, for the Royal Garden at Kew, and in which employment he so honourably acquits himself, as the Hortus Kewensis bears ample testimony, sent hither seeds of this Pelargonium, which flowered in that matchless collection in the year 1792; a few plants of it have also been raised from Cape seeds, by Mr. Williams, Nurseryman, at Hammersmith, some of which flowered this spring with Mr. Colvill, Nurseryman, Kings-Road.

It must be several years before the lovers of plants can be generally gratified with the possession of this plant, most of its branches running out speedily into flowering stalks, form few proper for cuttings, which are struck with difficulty, and perfect seeds are sparingly produced.

It appears to be equally hardy as most others of the same tribe, and to require a similar treatment.