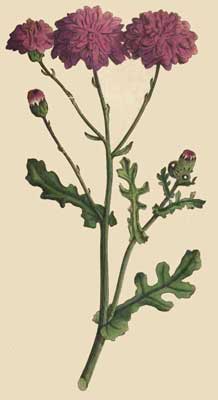 Linnæus has given to this charming annual the name of elegans, on account of the great beauty of its flowers, the florets of the radius being of a most brilliant purple, and those of the disk bright yellow; colours regarded as peculiar to this plant, till the Sen. venustus described in the Hort. Kew. was discovered and introduced here; it is a native of the Cape and other parts of Africa, grows usually to the height of a foot and a half, or two feet; flowers from June to August, grows readily, requiring the same treatment as other annuals of the more tender kind; seedling plants raised in the autumn in pots, and kept in the green-house or under a frame during winter, will, of course, flower much earlier than plants produced in the spring.

Within these few years, a variety of this Senecio with perfectly double flowers, equally brilliant as those of the single kind, has been introduced, and is here figured; this, from its superior beauty, is now cultivated, in preference to the single; there is double variety of it also with white flowers which being less shewy is not so much esteemed; both of these are raised, and that readily, from cuttings, which as soon as well rooted may be planted out in the open borders, where they will be highly ornamental during most of the summer; as young plants are most desirable, we should take care to have a constant succession from cuttings regularly put in, and to preserve pots of such in particular, in the green-house during winter, for early blowing the ensuing summer.

The single sort was cultivated here, by Charles Dubois, Esq. in the year 1700. Ait. Kew.