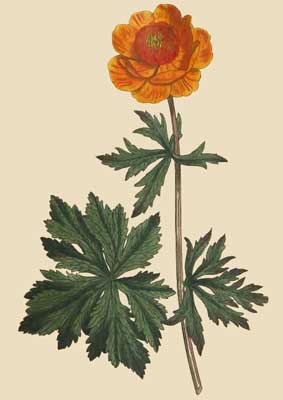 Of this genus, two species only have as yet been discovered, the one a native of Great-Britain, the other here figured the produce of Siberia and Cappadocia, both hardy, perennial, herbaceous plants; the latter, more particularly, from the bright orange colour of its flowers, held in high estimation as an ornamental plant, and flowering in May and June. This species, as yet rare in this country, is usually propagated by parting its roots in autumn; it may also be raised from seeds, which ripen frequently on strong healthy plants: to succeed in its cultivation, we should plant it in a composition of loam and bog earth, and place it in a north border, taking care that it does not suffer from want of watering in dry summers.