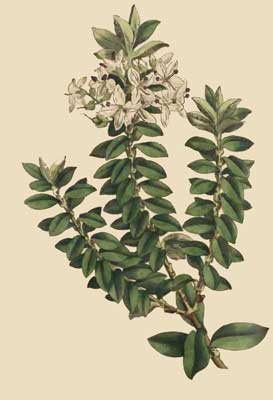 The plant here represented, is a native of Falkland's Island, and was introduced to this country by Dr. Fothergill, about the year 1776; if permitted to grow, it will become a bushy shrub of a considerable size: it has been chiefly admired for the unusual and regular growth of its leaves, which are ever-green, and grow thickly on the branches, cross-wise, affording an excellent example of the folia decussata; but it is entitled to our admiration on another account, its blossoms have a most delicious fragrance (similar to that of the Olea fragrans) not mentioned by authors, and we believe scarcely known, having never heard it spoken of by those who have cultivated the plant; its flowers, which are white, are produced on the tops of the branches, which, however, they do not strictly terminate, but usually grow out just below the summits, on short racemi; the corolla is sometimes divided into five segments, and there is a greater equality in the segments than is usually found in the flowers of the Veronica, the seed-vessel differs also in its form, being longer, more oval, and scarcely emarginate; these several deviations from the structure of the Veronica genus, joined to the fragrance of the blossoms of this plant, induce us to think, that it has more affinity with the Olea above mentioned.

Cultivators complain, that it does not blow freely; without any peculiarity of treatment, it flowers with us every year, about the middle of June; it is one of the more hardy greenhouse plants, which is usually and readily increased by cuttings.