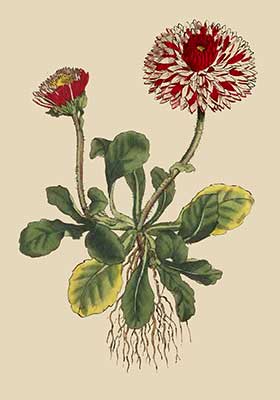 The daisy, a plant common to Europe, in its wild state delights in open situations, which are moderately moist, its root is perennial, and increases greatly; the usual colour of its flowers is white, the florets are sometimes tipt with red, but more frequently red on the under side.

When double, the daisy becomes much more ornamental, and in this state many varieties of it have long been cultivated, very generally in gardens; those principally found in our nurseries are

The large double daisy with florets of a deep red colour on the under side, figured on the plate; the flowers of this sort will sometimes expand nearly to the size of a half-crown piece, and are the most shewy of any that we have seen; the foliage of this sort is also proportionably larger.

The pale red double daisy, more delicate in its appearance, but smaller, varying in its shades of colour.

The deep red double daisy; in this the petals are usually tubular or quilled.

Besides these, there are

The coxcomb double daisy, both red and white, in which the flowering stem rises up preternaturally flattened, and carries on its summit a long-extended ridge of flowers, frequently of an enormous size; this monstrous production seems to arise from the coalescence of two or more flowering stems: and as it is of accidental origin, so we find that a daisy which has been a coxcomb one year, shall lose that appearance entirely the next, and out of a long edging of daisies growing luxuriantly, new ones shall here and there arise; we cannot therefore depend upon the constancy of this variety.

Another singular variety is the proliferous or hen and chicken daisy, in which a number of flowers standing on short footstalks spring circularly out of the main flower; as this appearance for the most part arises from great luxuriance[A], this sort of daisy is also found occasionally to lose its prolific character: in my garden at Lambeth-Marsh, I once had a daisy growing in an edging among a number of others, which not only became proliferous, or of the hen and chicken kind, but its stalk also, or scapus, became branched, producing six or seven flowering-stems, with flowers at their extremities of the size of the common daisy; thus we find that the most permanent characters of plants are liable to be altered, and even destroyed, by accident, or culture.

Daisies appear to most advantage planted as an edging to a border, not that they are superior, or even equal to box for the great purposes of an edging; but in the spring of the year they enliven the border more, and add much to the general gaiety of the garden: in the formation of these, we shall give our readers some practical instructions, which will enable them to succeed much better than by following the mode commonly practised.

The last week in September, or the first in October, take up your daisy roots, and divide them into single plants; your border being dug, put down your line, and make a shallow trench along it as for the planting of box; in this trench place your plants three inches apart, spreading out their fibres in the trench, and pressing the earth closely round them; in this way they will soon become rooted, and firmly fixed in the ground before the approach of frost; should this business be deferred later, as it frequently is, and the daisies be planted with a dibber in the usual way, in all probability the worms will draw out every plant before spring, especially if the earth has been rendered loose by repeated frosts.

Edgings of this kind require to be replanted in the same way every autumn, as the plants, if they grow well, spread too wide; if the summer prove dry, many of the roots fail, and if they remain undisturbed in the same spot, they will degenerate and become single, notwithstanding Mr. Miller informs us, that he never observed them to do so.