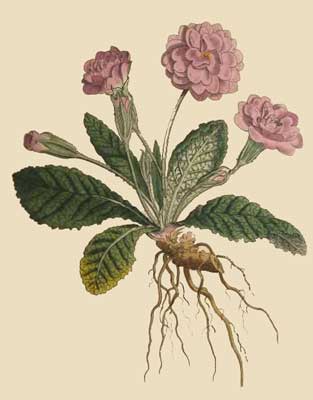 The Primrose in its wild single state is frequently introduced into shrubberies and plantations, for the purpose of enlivening them in the spring months; in its double state it has been deemed peculiarly worthy of cultivation by the curious in flowers. Of the double yellow Primrose, which seems to have been the first known, we meet with a figure in the Hort. Eyst. and in the Parad. Terrestr. of Parkinson, since those publications many new and perfectly double varieties have been introduced, as

The double white, rarely met with.

The double deep red or velvet, the blossoms of this will sometimes come single.

The double pink or lilac, here figured, a plant much admired.

The double crimson, a new variety, which, in brilliancy of colour, far surpasses all the others.

The red, commonly called the Scotch Primrose, less ornamental than any of the preceding: besides these, we have observed a variety with blossoms of a dingy yellow inclining to red, not worth cultivating.

These several varieties of Primrose are admirably adapted to the decoration of the shrubbery, plantations, or even the north side of rock-work; they delight to grow in a stiff loam, a moist and somewhat shady situation, so planted they thrive admirably, the double succeeding almost as well as the single; every second or third year their roots should be divided, which may be done either in spring or autumn, they may be cultivated also in pots for the convenience of removing them when in blossom.