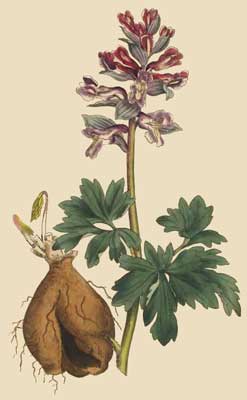 The hollow-rooted Fumitory differs from the solida, already figured, and that constantly, in a variety of particulars; its root is always, as far as we have observed, hollow, appearing sometimes, as Parkinson informs us, "like a shell, every part of which when broken will grow;" frequently acquiring a very great size; the plant itself usually grows to twice the height of the solida, bearing foliage and flowers proportionably large; its bracteæ or floral leaves, which in the solida assume a kind of finger'd appearance from the manner in which they are divided, in this are entire or but slightly indented; it flowers also about three weeks earlier.

Of the Fumaria cava there are three principal varieties in point of colour, viz. the white, the blush-coloured, and the purple, which, though plentiful in our gardens formerly, are now rarely met with; Mr. Chappelow informs me, that he found them all this spring, in an old plantation at Teddington, where they produced the most pleasing effect.

It begins to flower in March and continues in bloom three weeks or a month, rarely produces any seed, so that it is to be propagated only by dividing its roots; it is a hardy herbaceous plant, a native of Germany, and will grow in almost any soil provided it be planted in a shady situation.