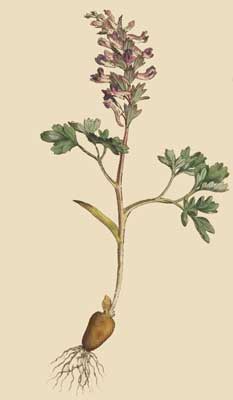 By the old Botanists this species of Fumaria, whose root is constantly solid, was considered as a distinct species from another similar to it of larger growth, whose root is as constantly hollow, and which will be figured in the next number of this work; Caspar Bauhine in particular, in his Pinax, describes the characters in which they differ: Linnæus nevertheless makes them varieties of each other, uniting them under the name of bulbosa; from this union we have taken the liberty to dissent, choosing rather to follow Miller, who regards them as distinct, and the Botanists preceding him.

The Fumaria solida, a very old inhabitant of our gardens, is a plant of very humble growth, rarely exceeding three or four inches in height, and producing its spike of purple flowers in April, which continue in blossom about a fortnight.

In point of colour the flowers of this plant are not subject to much variation, we possess a variety of it with blossoms of a much brighter colour than those of the common sort, and which, on that account, is much more worthy of cultivation.

As a spring plant, it deserves a place in the garden; in point of ornament, it is applicable to the same purposes as the Primrose, will grow in almost any soil or situation, requires to be taken up in the autumn, and fresh-planted every two or three years; if suffered to remain in the same spot for a great length of time, it becomes smaller, produces few or no flowers, and is so altered in its appearance, as to look like another species.