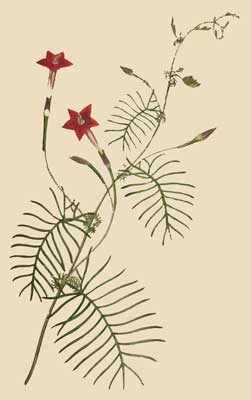 In a former number of this work, we gave a figure of the Scarlet Ipomœa, which every one possessing a garden, at least in the more southern parts of this kingdom, might gratify themselves with a sight of, it being hardy enough to flower and ripen its seeds in the open border; but the present species, an annual also, and equally beautiful, with greater singularity of foliage, can be brought to perfection only in the stove of hot-house.

Its seeds should be sown early in the spring, two or three in a small pot; when the plants are so far advanced as to shew a disposition to climb, they should be removed with a ball of earth into a middle-sized pot, in which one, two, or three sticks, four or five feet high should be stuck, for the plants to climb up; in the months of June and July they will flower, and ripe seed will be produced in September.

This elegant species, a native of both the Indies, was cultivated here by Parkinson, who minutely describes it in his Parad terr. when speaking of the seed, he observes, "with us it will seldom come to flower, because our cold nights and frosts come so soone, before it cannot have comfort enough of the sun to ripen it."