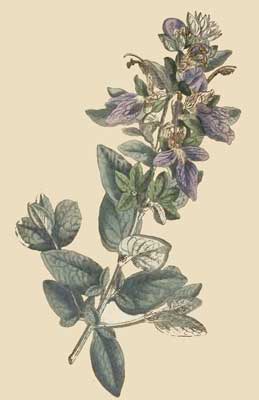 The Teucrium latifolium as well as the fruticans, which is nearly related to it, is a native of Spain, and was cultivated in this country in 1714, by the Duchess of Beaufort, vid. Ait. Kew.

It is a shrubby plant, growing to the height of seven or eight feet (it may be trained to a much greater height) now common in our greenhouses, and sometimes planted in the open border in warm situations, where it will bear about the same degree of cold as the myrtle; it flowers during most of the summer months, and is readily increased by cuttings.