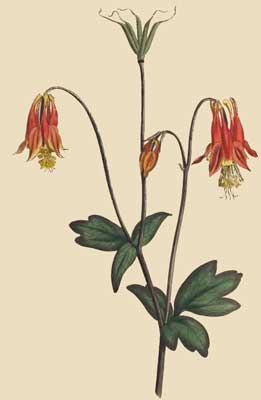 Parkinson was not acquainted with this plant when he wrote his Parad. terr. but in his larger and more general work, the Theat. Pl. published in 1640, he describes and figures it as a plant newly introduced from Virginia, by Mr. John Tradescant: Cornutus, in his account of the plants of Canada, gives us a representation and a description of this plant also; according to him, its usual height in that country is about nine inches; in the gardens here it nearly equals the common Columbine, which it considerably resembles in the appearance of its foliage, but differs in the form and colour of its flowers, the horn of the nectary is straighter, and the blossom in some of its parts inclines more to orange, which renders it highly ornamental.

It is a hardy perennial, and may be easily propagated by parting its roots in autumn or spring; it may also be raised from seeds, which ripen readily here; these are found to be a long time in vegetating, as are others of this genus.

We have observed in some gardens, a Columbine of more humble growth than the one here figured, called by the name of canadensis, and which most probably is a variety of our plant, its blossoms spread wider, are of a pale red colour without any orange, and hence being less beautiful, is, of course, less worthy of culture.