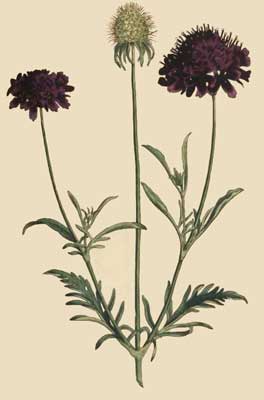 It is not a little singular that we should have no certain account of what country this species of Scabious is a native; Clusius who describes and figures it accurately, relates that he received seeds of it from Italy, under the name of Indian Scabious; he informs us also that he received seeds of a Scabious from Spain, which the same year produced flowers of a similar colour, but paler; Parkinson says this plant is verily thought to grow naturally in Spain and Italy; does he borrow this idea from what Clusius has advanced? he certainly gives no authority for his supposition: Linnæus mentions it as a native of India with a note of doubt; Miller does the same, omitting any doubts about it; Mr. Aiton leaves its place of growth unsettled.

The Sweet Scabious has long and deservedly held a place as an ornamental plant in our gardens, the flowers are well adapted for nosegays, have a sweet musky smell, and are produced in great profusion from June to October.

It is a hardy biennial, requiring yearly to be raised from seeds, these should be sown about the latter end of May, or beginning of June, on a shady border of fresh earth, thinning the plants as they advance to the distance of three or four inches; in autumn they should be removed into the border, where they are intended to flower, thus treated they will become good strong plants against winter, flower early the ensuing summer, and produce abundance of perfect seeds.

The blossoms vary in colour, towards autumn the edge of the florets become paler.

Parkinson, deviating from his usual accuracy, describes the flowers without scent. vid. Parad.