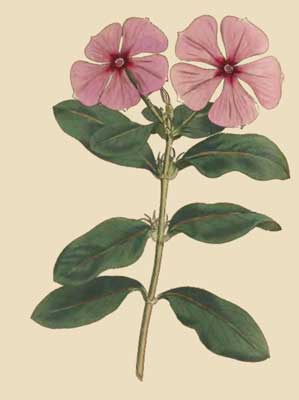 The Vinca rosea was first Cultivated in this country by Mr. Philip Miller in 1757, he observes that it deserves a place in the stove as much as any of the exotic plants we have in England, because the flowers are very beautiful, and there is a constant succession of them all the summer.

"This plant grows naturally in the Island of Madagascar, from whence the seeds were brought to the Royal Garden at Paris, where the plants were first raised, and produced their flowers the following summer; from these plants good seeds were obtained, which were sent me by Mr. Richard, gardener to the King at Versailles and Trianon. It rises to the height of three or four feet; the branches which when young are succulent become ligneous by age: these flowers which appear early in the summer produce ripe seeds in the autumn.

"This sort is propagated by seeds or cuttings in the usual way; unless the summer proves warm these plants should not be placed abroad, for they will not thrive if they are exposed to cold or wet, therefore during the summer they should be placed in an airy glass-case, and in winter they must be removed into the stove, where the air is kept to a temperate heat, without which they will not live through the winter in England. Mill. Dict.

There is a variety of this plant having white blossoms with a purple eye.

The flowers do not always grow in pairs.